This was our second day in town. We oriented ourselves to the subway and took it all the way to the downtown end, landing in the civic and tourist centre, Plaza Mayo. Here we saw… tourists. Also lovely public buildings, a half-dozen full-dress military guys with shiny black boots in formation crossing the street at a shouted officer’s command, and a large public square.

Hungry for lunch and already with a few reservations for subsequent days, we googled “steakhouses”, and were encouraged to promenade along the Puerto Madero where a  line of large restaurants with outdoor terraces formed the main floor of sandblasted brick buildings looking originally to have been shipping warehouses. These fronted on the Rio Darsena Sur, a tiny offshoot of the massive Rio de la Plata, widening into the Atlantic like the St. Lawrence.

It was just starting to rain and so we evaluated these restaurants partly from how they looked and partly ready to duck in like musical chairs as soon as it really started to pour. We got lucky.

One can enter Mirasol from either side, the other one more formal with valet guys and a hot plastic mini-skirt hostess. We didn’t have to brave that show and were taken straight to a perfectly nice window table, the place maybe 30% full at 1:30 but packing almost completely out an hour later. Servers were all middle-aged men in grey outfits, none speaking any English, suggesting this was a fairly local crowd.

The menus were comprehensive. Lots of side-orders of different sorts of vegetables, but predominantly long lists of meat, fish, and proteins starters. There was pretty well every kind of beef, pork, lamb, and goat you could imagine, and then some “offal” sides or starters including sweetbread, tripe, kidneys, etc. The wine list was long and detailed, but without any dates. There were about three dozen Argentine malbecs. Waiter recommended a Catena Zapata 2015, the producer I confirmed being one of our top dozen or so from Mendoza. We ordered sweetbread to split to start, and then a ribeye steak done rare. 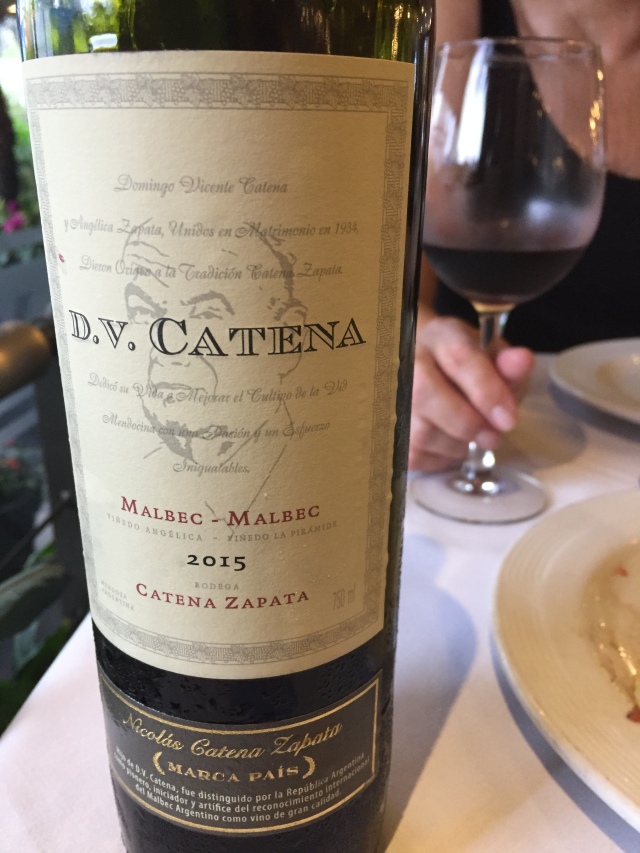 A couple of dumplings arrived on a plate, lukewarm, dry, and flavourless. We started with the wine which was austerely fragrant with medium roundness and length in the mouth (we are trying to get used to malbec). The elderly waiter asking permission in sign language popped the bottle in an ice bucket, an impressive touch for anyone who likes their red at cellar temperature. The sweetbread unfortunately hadn’t been prepared by parboiling and pressing, and the pieces were of various sizes. The little ones were okay but the big ones were rare inside, and unfortunately many of all of them were just burnt. With salt and a mint sauce there were tasty enough, but I don’t think this kitchen is used to turning this dish out.

We ordered “French fries” which came as mandolined potato fried in indifferent (no doubt vegetable) fat, and a Caesar salad with iceberg lettuce strangely chopped up but quite delicious with a good-quality olive oil offered and poured overtop.

The steak was just a very nice ribeye steak, done medium-rare although we ordered it rare, and went down beautifully, particularly the slices that included fat. Trying my best I couldn’t convince myself that this was any better than a ribeye from Granville Island, the Gibsons butcher, or Cioffi. Very nice, tender, nicely-cooked beef steak.

No question this was a serious lunch in a classy traditional restaurant. The surprise as usual here in Buenos Aires was the price: $92 Canadian. And we had a split of champagne to start, shame on us. The servers were delighted with the 10% cash tip.

Overall, unbelievable value for what you get, even though what you get is actually relatively ordinary food, served up in a high-class atmosphere by experienced people. We will see what the other steakhouses in town are like.