Here we have one of the top two or three Buenos Aires versions of haute cuisine. It was impressive and like everything else in town well-priced by North American standards. The doors open at 8 PM, apparently closing sometime early AM, portenos (Buenos Aires citizens) behaving like Spaniards and having dinner between nine and midnight and then partying pretty well until time to get up and go to work. At any rate we were among the first two or three seated.

Chila is part of Relais & Chateaux, usually and in this case an indicator of solid comfort and class. It’s in the growing (read actively under construction) neighbourhood of Puerto Madero, and is a sumptuous modern complicated space, with a row of tables (one of which was ours) along wide windows facing the river tributary and the rest of downtown. Other big windows give a view of the busy well-populated technically impressive kitchen. A pleasant but we thought overly-enthusiastic English-speaking young guy was our server, and presented a list of cocktails and drinks. There were two meal plans, one for three courses and one for seven. We opted for the former. Two choices for each course, and for an extra $Ar600 (Argentine pesos, about C$18) wine accompaniments. For the sake of variety and because of our preference we went for the wine accompaniment and opposites with each choice.

The cocktails were nice. They had strange names in English like Dirty Bastard, we had a sour gin-based item on the rocks and a manhattan-like straight up one, both tasty. “Snacks” arrived, a little potato chip sandwich with three or four distinct soft flavours, and then a truffle of pureed ostrich meat with hazelnuts dredged in black garlic coarse powder. The “wine” here was a cider which had a subtle delicious bubbly apple flavour.

First course was squid with separate mushroom and pepper purée, presented as a sheet of flesh which had been cross-hatched, fishy and a bit crisp, and the two purées very contrasting, the brown mushroom one extremely concentrated in flavour. Plus an onion-festival item also with a foamy mushroom purée this time white, little cups of cooked onion containing an onion broth set on the frothy purée. This one wasn’t as impressive flavour-wise, and the onion broth tended to mix with the purée to a sort of gustatory brown.

A Mendoza chardonnay was the accompanying wine, first-class and Burgundy-like without any hint of new-world empyreumatic overstatement that steers us away from California and Australia versions.

Main courses were beef (a cut which our server didn’t coherently describe) with an orange pepper purée and fish (described as some type of perch) with a foam sauce on a lentil-like bed. I ordered the beef “blue” (this is the local version of rare, always eliciting a knowing leer from servers). Server presented a box containing about ten murderous-looking sharp knives. It took me a moment to understand what was being proposed, but I chose the heaviest-looking one (to cut the meat). It was rare, melt-in-the-mouth tender, and zestily contrasted by the pepper purée. The fish was perfectly cooked, of the dry or flaky white fish variety, tasty and complemented nicely enough by the sauce and veg. 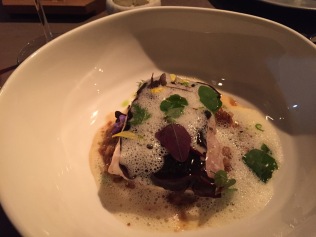 There were two wines with this course, a pinot noir with the fish and as expected a malbec with the meat. The pinot quite nice, maraschino-fragrant but off-balance to acidic in the mouth, the malbec confirming our impression of the syrah-like character to this wonderful Argentine original. Sommelier server lady poured all the wines twice if indicated.

We took a look at the wine list and it was long but narrow, almost without exception Argentine. Nothing wrong if you consider the four-figure US dollar price a burgundy or barolo would probably require, an Argentine peso number that would by itself increase the size of the list.

The maître d’ was a charming short-stature guy with perfect nuanced English and a knack for making guests feel singled-out and well-treated. Big contribution to the high-class feel of this place. We tipped 15% which was beyond staff expectations bringing the price to just a short of Ar$6000, about C$180 which looked like a bargain all things considered.