I think we hit the mother lode opting for this steakhouse in a nondescript Buenos Aires neighbourhood. At last we understand Argentina’s claim to fabulous beef, and the physical plant and staff emphasize the carnivore orientation of the place. A real delight, and we intend to return for a lunch we will be having on the way back through town heading home from Mendoza.

I messed up on our lunch reservation, which was for 1 PM not 2 as I’d thought, but we were seated within 15 minutes and quite happy.

A very cheerful waiter welcomed us and showed us the detailed and mouthwatering menu, and a typical Buenos Aires long but strictly Argentine wine list. Sweetbread and kidneys as well as pork were included, but front and centre were over a dozen grilled beef cuts. A sommelier came over and oriented us to the malbec choices in our price range (Ar$2000; C$60). We went for a Val de Flores 2012.

We had seen heaping plates of steaming French fries carried past and figured when in Rome… That said, we shared a salad starter nominally bean-based but mostly pea-pod, done up with a respectable sour vinaigrette. They sent the fries as a first course along with the salad so they were less than piping hot by the time the steaks showed up. And they weren’t quite at fabulously crisp rich-potato North American (or Santiago fish-market) standards, but with salt still just fine.

I was set to order the “tenderloin” which I pictured as an ethereally succulent filet mignon, but Robin wanted the short ribs until she was told that they are just grilled, not long-cooked, and she switched to the tenderloin. I would have ordered it “blue” which is Argentine code for super-rare, but she ordered medium-rare. The waiter convincingly suggested to me the lower-priced ribeye steak, which I also ordered medium-rare, worried that the wonderful extra fat in that cut might not be adequately cooked.

Small iron crucibles of chopped onion-tomato and chimichurri were set down, the chimi a unique sharply sour and contrasty-flavoured symphony of oregano and parsley with vinegar and garlic and plenty of salt. Then the steaks arrived.

The tenderloin wasn’t filet, and sadly was just a shade overcooked and also a shade chewy. We wondered if ordering it “blue” might have made the difference. I think considering the ribeye the difference was about fat, this tenderloin being pretty lean. The ribeye was just heavenly. I considered carefully but couldn’t remember a better steak. Bear in mind I’m memory-impaired, but let’s just say that in that cheerful dark-woody bustling place finally confronted with a real example of Argentina’s famous favourite dish I became a convert. The chimi and plentiful salt provided on the side only made everything better. 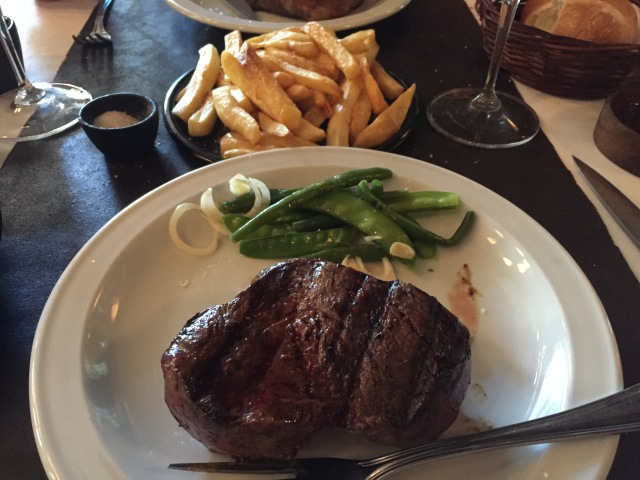 The Val de Flores 2012 Malbec was the best wine we’ve had here so far (we brought home four bottles when we visited the winery), superior to a couple of syrah-oriented rich oriental-spiced (and even in one case a little volatile acidic) malbecs we’ve had in other restaurants. Both of those were 2015, and this had a little bottle age which might have helped it to be more austere (read less sugar), without losing any of its clean acid and very nice round length if you went to the trouble of aspirating which of course delayed the next mouthful of meat. Beautiful accompaniment!

This lunch was around $Ar3500 (just about C$100) and we left a 15% tip in cash. Typical very good value from a high-end Argentine eatery. Like I say, we’ll go back here again and if you’re ever in town strongly suggest you do the same.