I can’t resist open fish markets in strange cities: the huge Tokyo Tsukiji Market (recently moved, I haven’t been to the new one), lively Huangsha in Guangzhou China, and urbane Les Halles in Lyon. This covered market built in the middle of Santiago in 1872 is a historic monument and serves multiple purposes. They do sell dead fresh fish here out of a couple of dozen stalls, but there are also about a hundred grubby flea market outlets inside and in the surrounding few blocks, and several dozen restaurants inside the market. The market is old and certainly looks it but smell-wise and judging from the freshness of the product on display it’s clean.

The restaurants are divided into relatively respectable-looking ones in the center, and smaller street-food-style ones around the periphery, the common feature being barkers out yelling and flagging passers-by in to their tables. Lonely Planet suggested avoiding the “tourist” ones in the center and we took that advice, used the sniff-and-occupancy criteria, and landed in this little place. We were glad we did.

It’s Hanoi-style tiny: ten jammed-in tables inside and about four outside, the door at the back leading into a fragrant noisy kitchen also very limited in space. Chubby teenage server had not much sense of humour and patience after telling us in several languages that service was not included, but got us a bottle of room-temperature sauvignon blanc and left us to work on the partially phonetically English-translated menu. 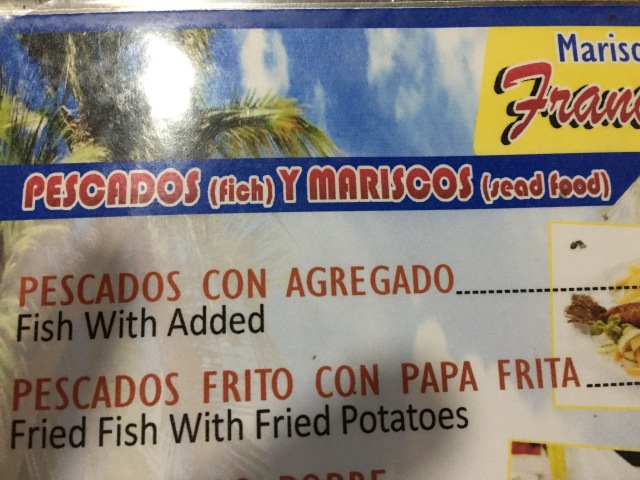 All around us were presumed Santiaganos chowing delicious-looking deep fried fish, salads, fries, and shellfish. Our table was mostly occupied by cut lemon, salt, flavourless oil, and a plain white vinegar.

We went for prawns-and-garlic and salmon-and-fries mains while (without giving offense) fending off a guitar mariachi’s Stairway To Heaven intro. He headed for greener pastures. When the food arrived we were just stunned at the quality.

The cut-up prawns released their delicious deep fresh tenderness in a rich broth of stock and garlic, a real treat although not enough. Cutting off the first piece on the crisp edge of the deep-fried salmon scared me that it was going to be overcooked (which would have been at-expectation), but when I persevered the rest was magnificently light crunchy-battered (I suspect probably farmed Atlantic), fresh and creamy-salmony-soft inside. And the fries! We’ve had in steak restaurants and other places here in South America some disappointing french fries, but these were hot, crisp (and held that crispness as they cooled off), soft and real potato-flavoured inside, done in a clean but indifferent vegetable fat (imagine if they had a fryer full of beef tallow!).

Salt and lemon all over everything and this was a fantastic straight-ahead fast- or pub-food treat. Somebody back in that little kitchen knew what the hell they were doing.

About C$20 with a dull local bottle of white. I have no idea if this was the rule or an exception in the market. Would the higher-class places have done as good a job but been more interesting? Don’t ask me. Anyway food 9.2, service 6.1, ambience “traditional” (like ridiculous), value 8.0, peace and quiet forget it. Of course we will never be back…