Absolutely stunning high class Argentine restaurant. We needed help getting a reservation and were only able to make it for 10 PM which is well past our bedtime. Standing around in late-the evening Mendoza traffic trying to flag down a cab cost us 30 minutes so we were late, but were received like royalty and treated the same.

The place is in an unlikely neighbourhood, part of a large defunct facility of some sort approached through a wide iron door, the taxi driver banging on which produced a sort of security guard who demanded our reservation, and then admitted us through a industrial-type ante-area to the bar of the restaurant where we were affirmed as having made our reservation, and given a place outside on the lawn to sit and wait with a couple of glasses of viognier. 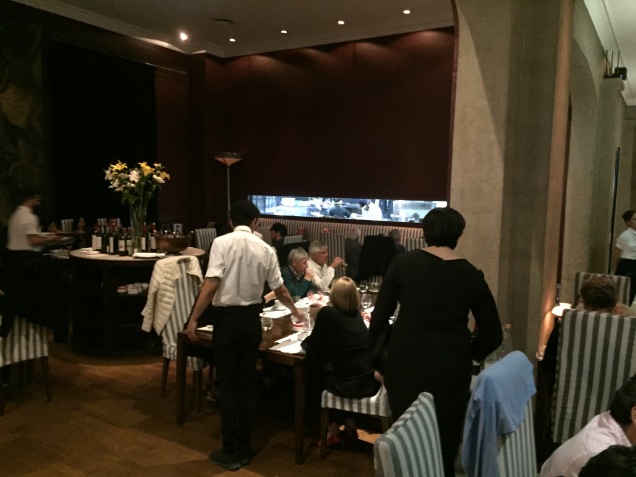 There are sort of four spaces, the bar, an indoor conventional restaurant room complicated by dividers, an outdoor area where there are multiple grill and clay oven cookeries, and a wide lawn. People were seated more or less at random in the illuminated night at coffee tables on the lawn, we could see employees working at the various ovens, and we declined to join a group of waiting people in the bar.

Eventually our nice Scandinavian-style English-speaking lady told us she had found us a table inside, and we sat along a narrow sub-space off the main restaurant. A lovely humorous English-speaking guy arrived and presented the menus, and we had a second glass of very tasty northern Rhône white. The menu was predictably extensive, but the wine list had about 700 items, also predictably very heavy on malbec.

The atmosphere was busy, noisy, what you would expect for an affluent crowd around 11 PM. High ceilings, and an obviously decadent but strange physical space with iron grill windows and varied but conservative lighting supported the only slightly muted good time.

We shared a starter of octopus and then had a main each: gnocchi for Robin and a wagyu steak with potatoes for me. As we usually do here we ordered a malbec for about 2000 Argentine pesos (C$70) which was one we were bringing three bottles of home: Lindaflor 2012 for which we had paid about $50 Canadian at the cellar. For a reason I can’t explain Apple isn’t allowing me to download the photographs of these lovely dishes.

Anyway dinner was just terrific. The octopus was the best I think either of us had had. A single large tentacle, beautifully soft meaning it had been braised first, and then grilled to dark brown. The flavour was complicated, not-overwhelmingly garlic and something else, and there were perfect little roasted potatoes alongside. Tentacle tender and packed with ocean crustacean flavour. Robin’s gnocchi was a beautifully-seasoned and complicatedly-flavoured delight, and my steak although I ordered it “blue” could have been done a little less, and appeared as a long-triangular tri-tip cut. The flavour of the steak was terrific but improved by spread cimchiree across the top. Under this was a plate-wide very thin disc of overlapping “Anna” fried potatoes the fat-fry of which I couldn’t identify but which ranged from crispy to soft. Just terrific with the wonderful wine.

The cost of about 5500 Argentinian pesos (C$170) while not trivial was for what we got less than a half what we would’ve paid for this class, quality, and presentation anywhere in North America.

Obviously a fabulously high-end and baroque-style place where wealthy local people go to eat, but where anybody from north of Mexico can count on a real bargain for a wonderful experience. If I’m ever in this town again that’s exactly where I will go for at least one meal. Food 9.4, service 9.1, ambience 9.4, value 9.4, peace and quiet 6.2.