Delightful and unique. We were at the same-named restaurant in Toronto several years ago and not much impressed, but this is obviously the original. It’s cozied into an expensive upper east side boutique hotel (the Surrey; rooms start around $600) like Cinq in Paris. The welcome is cheerful and easily formal (they’re taking a bit of a look at you), and the room exudes old-fashioned high class without being ornate. The “café” with its one Michelin star, and lunch, are a relatively inexpensive sneak peek at M. Boulud’s world without coughing up for the second star at, for example, his Daniel. 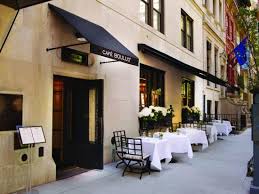 The staff is middle-aged, completely comfortable with relaxed formality. They come and go quietly, doing pretty well what you want them to at the right moment. There’s no music in the room, just the subdued hubbub of happy mature conversation. We’d thought this kind of ambience had disappeared from the face of the earth…

The menu is simple, on the left is a fixed-price lunch of two or three courses for $39 and $49 respectively, and I couldn’t believe my eyes that at the bottom of the page they suggest a minor but respectable bottle of Loire white and a Languedoc red for $35 and $40. Over on the right side are four suggested combinations à la carte, and everything is mix-and-match. Leafing through the wine list I confirmed that it’s dead serious, a couple of Roumier Bonnes Mares for $500-$700, and a 1985 DRC La Tache for $8900 in case some high-rolling show-off mistakenly found his way here.

Robin had a smoked sturgeon and then buratta ravioli with spring peas from the à la carte side, mine was Spanish mackerel (below) and a braised lamb navarin off the two-course fixed menu. The nice lady server reassured us that we could take any left-overs with us when we decided to order both of the inexpensive wines for, together, just slightly less than the cheapest Burgundy on the regular list. We couldn’t resist finishing up with molten chocolate cake and a praline pecan pie. 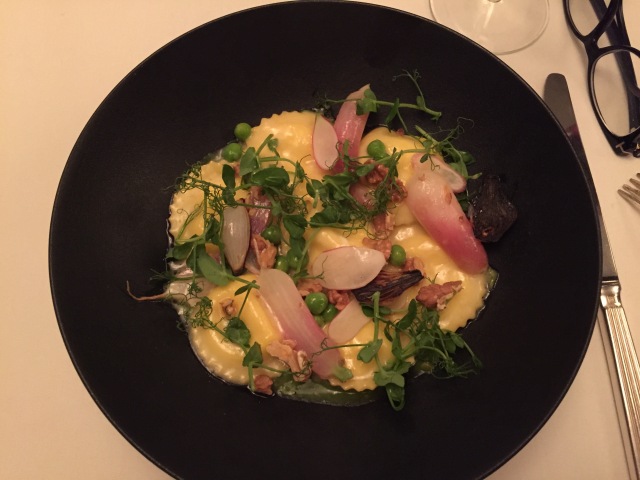 Most of the dishes in retrospect needed salt which of course wasn’t on the table and for some reason we didn’t ask for it. The mackerel was just a bit on the heavy dry side, the smoked sturgeon also not quite as soft as I was hoping but delicious and tart with its orange caper relish. The ravioli was a classy understated treat with a seasoned cream sauce and tiny peas, and I really enjoyed the braised lamb pieces which were rolled in breadcrumbs and dished up with little carrots and parsnips in a simple jus. The chocolate cake was rich and dark but balanced with a sweet chunk of frosting on the side and praline pie unusually light and fluffy but tasting just like the New Orleans treat.

We could have had lunch here, sticking to the fixed-price menu and with just one bottle of their recommended wine, for about US$140, but we got carried away and ended up spending over US$300. We finished up both bottles.

This place is the real deal, both for its atmosphere and quality, and for the accessible prices if you choose properly, a kind of not-so-well-kept secret hidden in the upper East side, a short walk from the Guggenheim and Metropolitan Museum of Art. Fantastic!

We came back two days later for brunch: same impression. Croque madame and crab eggs Benedict following a shared starter of smooth smoked salmon. All pretty much flawless with a southern French white at $65. 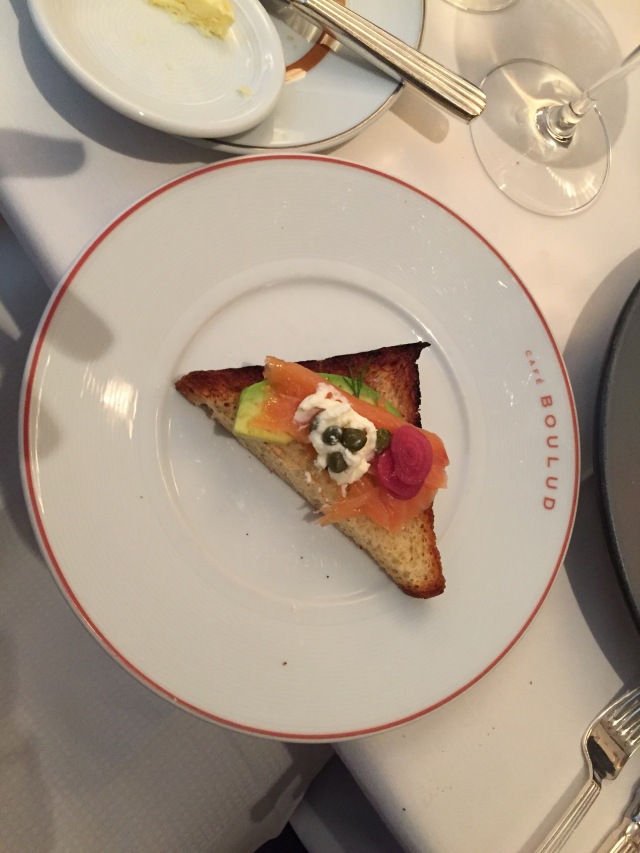 No change in scores, for us this place fires on twelve cylinders.