This is billed as a or the premier pizza place in New York City. There must, of course, be hundreds of these but prominence here may also be attributable to a “best hamburger” competition between Emily and “Au Cheval” which has recently metastasized from Chicago (not clear whether it takes unfair advantage by using horsemeat). We had a vacant lunch slot so found our way to the south Manhattan location.

(Executive summary: you can probably do better)

It’s a busy noisy little corner bistro, close to full up at 2 PM. Staff are young and cheerful, the menu millennial-friendly (pizzas grouped according to colour: red, pink, white, green…). There’s really only one hamburger, the Emily Burger Double Stack: two patties, caramelized onion, pickles, sauce. The pizzas are all rectangular “Detroit” style, which is semi-deep-dish, about a centimetre and a half thick. Pizza names include Pig Freaker, Vodka, The Grammy.

House wines are available by glass, bottle, or 250 mL size (the latter comes in a beaker). My red, nominally a barbaresco, wasn’t bad at all.

It was hot inside as well as noisy but we got used to it. Apparently the windows don’t open, even though we asked nicely. It’s a young crowd, of course not confining itself to its indoor voice.

The hamburger was in fairness respectable, the meat medium rare like you can’t find in Canada, the pickle very satisfying, the bun fairly soft, and lots of pink super-flavour sauce (quite similar to our own White Spot secret sauce, mayo plus sour), and (I give it extra points for this) frankly greasy and beautifully soft in texture. I wasn’t quite as sold on the pizza, Robin and I not agreeing on consistency – she likes soft I prefer crunchy crust – and I not as wild about buratta as I was when it first became trendy about 15 years ago. The fries were curly and not quite as crisp as I like them. 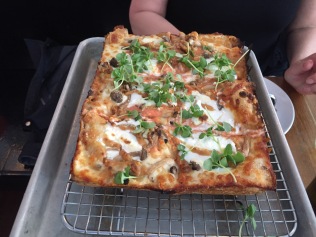 The guy next to me said it was the best burger he’d ever had. Poor fellow. I prefer all of the several hundred White Spot burgers I’ve had in my life, plus dozens and dozens we have now perfected at home, using brioche bun and pork/beef (or even pork/game) meat and a homemade sweet and sour pickle relish. Sometimes with a fried egg and mushrooms but always including bacon. But quite honestly there’s not that much to choose among loaded soft burgers with property-cooked meat.

And I’m not as impressed as I might be with hamburgers containing foie gras, caviar, shitake, prosciutto de Parma, Epoisse, etc. If I want fancy food I go to a fancy restaurant, which this isn’t.

Anyway at US$120 including 20% tip for a big satisfying pub lunch with less than a bottle of ordinary wine I don’t think we’ve gotten away with much.